In October we published an article announcing that two Guinness World records had been awarded to EVE Online in the aftermath of the battle known as Fury at FWST-8. In it we provided some information about the prelude to this current war, going back to 2016.

Today, we’ll take a closer look at the Fury at FWST-8 itself and provide you with some statistics about what you the players put into creating this record-breaking battle.

Hostilities in this current war commenced on 5 July 2020 when the non-invasion pact between the Imperium and Legacy Coalition came to an end. Shortly after, Legacy Coalition along with Pandemic Horde, Pandemic Legion, Northern Coalition, Winter Coalition and many other allies (henceforth referred to as “PAPI”) began their push west towards the Imperium-held regions of Delve, Querious, Period Basis and Fountain.

The next 3 months saw PAPI forces gain ground as the Imperium, reckoning that they couldn’t mount an effective defense of the entirety of their sprawling empire in the face of such overwhelming numbers, ceded outlying regions in a strategic move to concentrate defensive efforts in their home region of Delve.

Finally, by 4 October PAPI had arrived on the Imperium’s doorstep.

However, Delve was a heavily fortified region. Since 2016 the Imperium had been building up their defensive infrastructure: Citadels, Engineering Complexes and Refineries to stage their fleets from, a private jump bridge network to speed their travel around the region and of course accumulating massive stockpiles of ships, modules and ammunition. Fighting in the Imperium’s backyard would be a daunting task.

In order for PAPI to push into Delve they would need the support of their supercapital fleets – their Titans and Supercarriers. For the time being though PAPI’s supercapitals were held on the borders of Imperium space. With a limited jump range there was only so far they could project their power into Delve, and with no safe harbour in the region itself they would find themselves exposed and fighting in the shadow of the Imperium’s own considerable supercapital fleet whenever they deployed. And so the next strategic goal of PAPI forces was to online a Keepstar-class Citadel somewhere in Delve as a forward operating base.

This posed a problem since anchoring a Keepstar takes significantly longer – nearly a full week, in fact – in a system with an enemy Infrastructure Hub and high Activity Defense Multipliers; something which all Imperium-held systems in Delve enjoyed. So PAPI instead looked towards the Delve constellations of XPJ1-6 and 6-UCYU. Because the systems in these constellations were held by the Blood Raiders NPC faction and so contained no Imperium Infrastructure Hubs, it meant that a Keepstar would take only the usual 24-hour period to complete anchoring.

Of course, the Imperium also knew this was the most logical strategic move for PAPI to make and any attempt to establish a Keepstar in one of the Blood Raiders systems would be fiercely resisted.

PAPI would make their move just after midday UTC on 5 October. The system chosen for the attempt would be FWST-8.

Delve is a region that consists of 97 individual solar systems. A Titan with max skills is able to jump itself or bridge friendly fleets up to 6 lightyears away, meaning that a fleet of Titans based out of a Keepstar in FWST-8 would be able to project their power over 69 systems in Delve – 71% of the entire region. This represented a threat that the Imperium had to prevent at all costs. 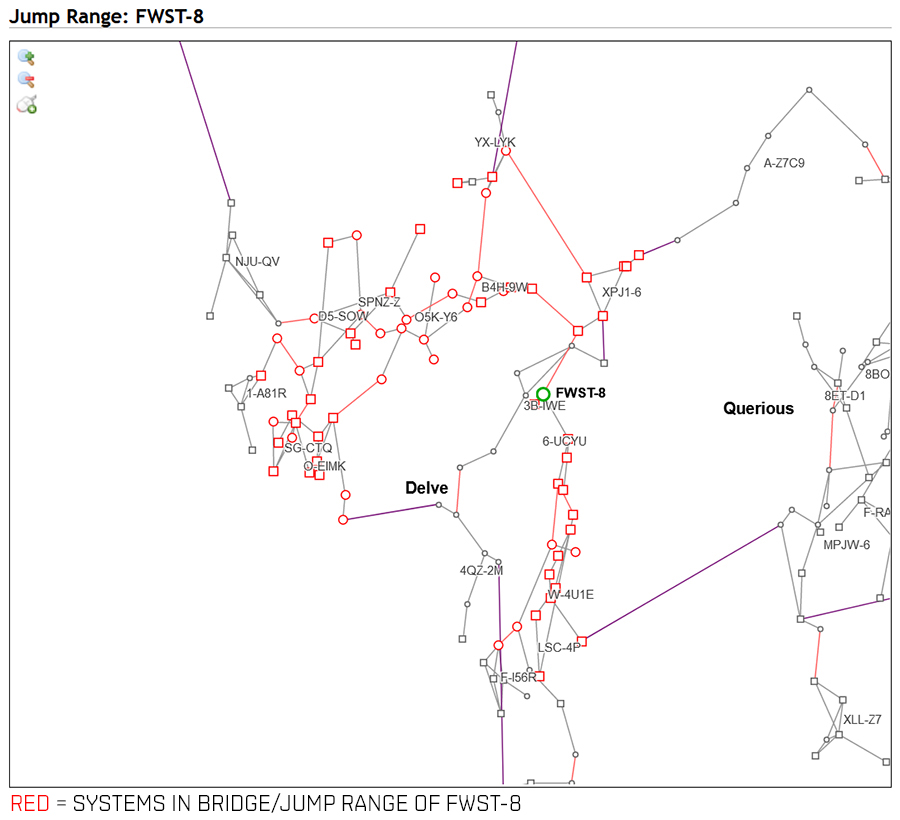 Imperium forces reacted swiftly to PAPI’s attempt to anchor a Keepstar and flash-formed in response to strike during its initial 15-minute vulnerability window. After a 5 hour battle the Imperium forces were victorious and the Keepstar lay in ruins. However before the smoke had even cleared a second Keepstar had been deployed by PAPI elsewhere in the system and was able to successfully begin the anchoring process. It would become vulnerable again in 24 hours and the fight that ensued would become the biggest PvP battle in video game history.

At 16:34 on 6 October with an hour to go on the Keepstar’s anchor timer PAPI’s Jackdaw Tech III destroyers began to arrive on grid supported by interceptors and interdictors. They were followed shortly after by some fleets of Muninn heavy assault cruisers. 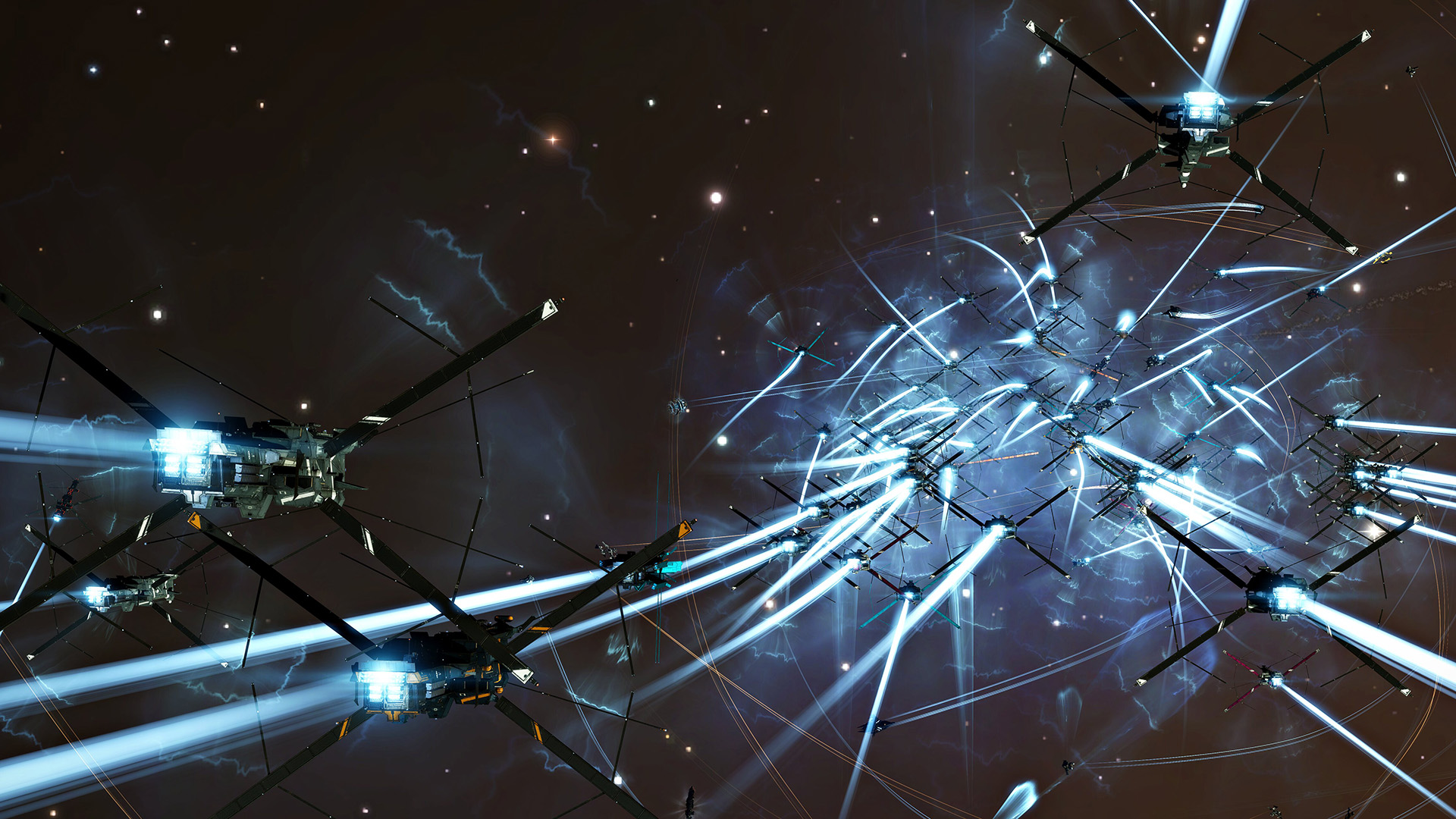 Numbers in local continued to grow steadily with the local count passing 4,000 at 16:52 as the first battleships consisting a Nightmare fleet accompanied by Eagle heavy assault cruisers landed and began taking up positions around the Keepstar. With the grid secured, PAPI would soon bring in supercapitals at the centre of the defensive formation right on the Keepstar.

At 17:36 with local topping 6,000 players the Keepstar’s anchoring process completed, started its repair timer phase and was once again vulnerable to attack. The Imperium would only have a narrow 15 minute window to apply enough damage to pause the timer so they could set about destroying the Keepstar. 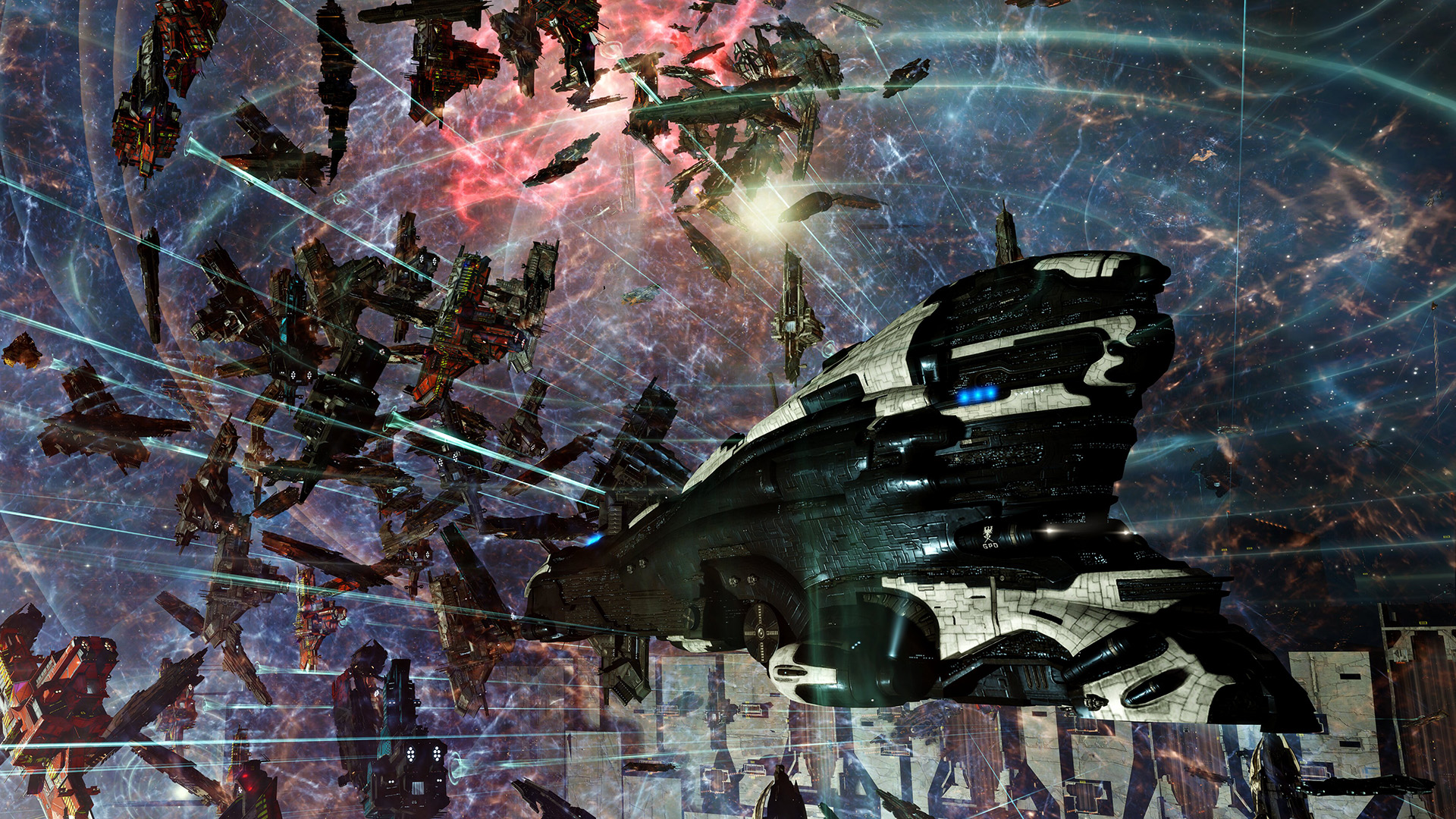 Almost immediately Imperium Rokhs and Ravens began landing on grid in a distributed sphere adding a mantle of battleships to envelop the core of defenders and began pouring fire onto the Keepstar from long range. The Imperium successfully paused the repair process at 17:43 with 8 minutes left on the timer.
Imperium dreadnoughts and carriers began trickling in and slowly built up the critical mass of damage needed to chew through the Keepstar’s structure hitpoints.

Thousands of players would continue to battle through the night as Imperium dreadnoughts rained destruction down on the station while PAPI Titans attempted to doomsday them off. In between those giant ships exchanging blows, dozens and dozens of smaller skirmishes between subcapital fleets played out as well as more personal battles between individual frigates, destroyers and the occasional stealth bomber appearing to fling a bomb into the mix. 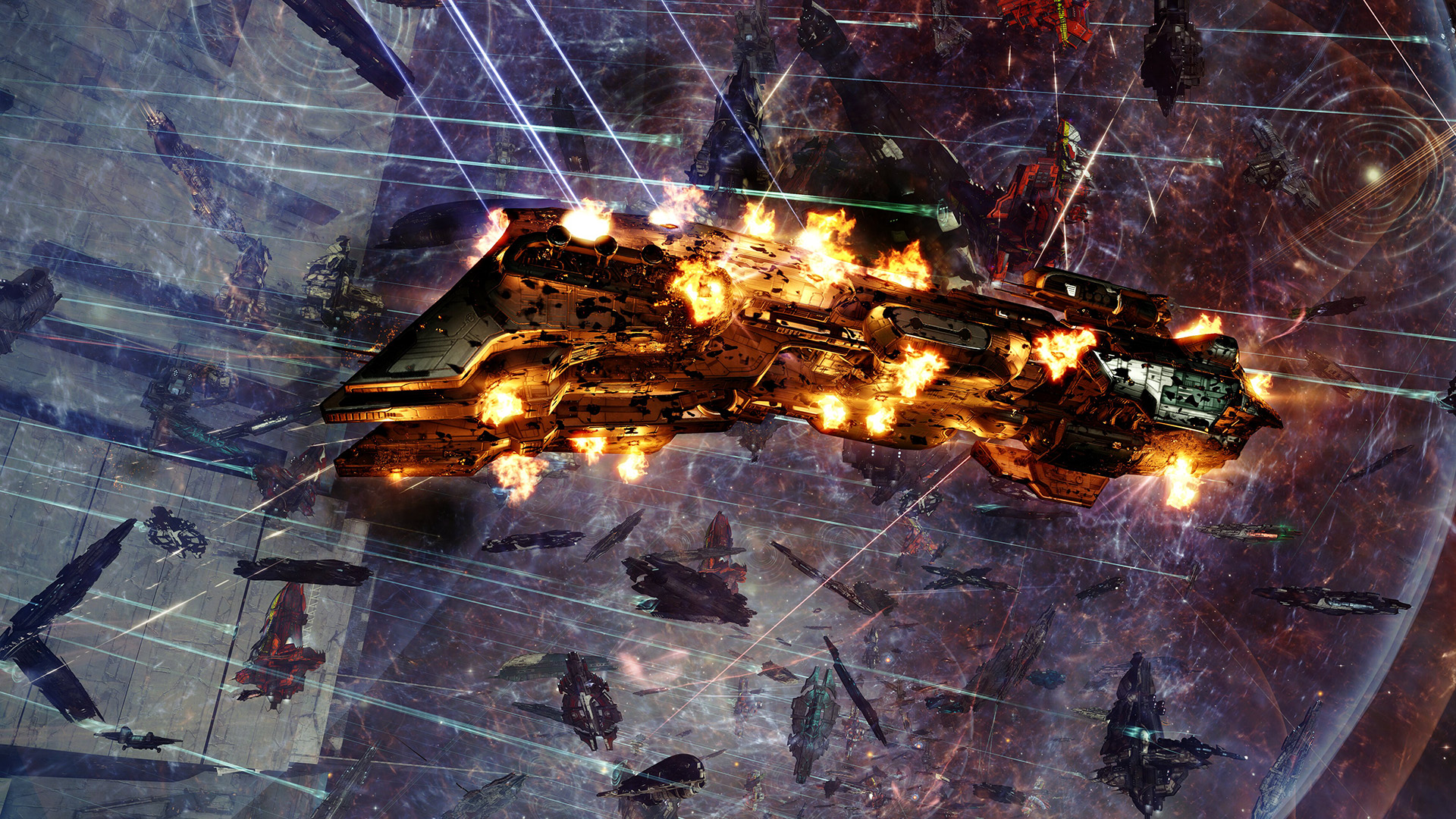 At 05:27 on the next day – 11 hours and 44 minutes after the repair timer was paused – the last of the Keepstar’s structure hitpoints were worn away and it finally succumbed, exploding in a dazzling flash of light. The Imperium had won their strategic objective and PAPI would have to try again if they were to secure their critical beachhead Keepstar in Delve. The victory came at a great cost though with a considerable amount of both sides’ materiel being depleted in the action. 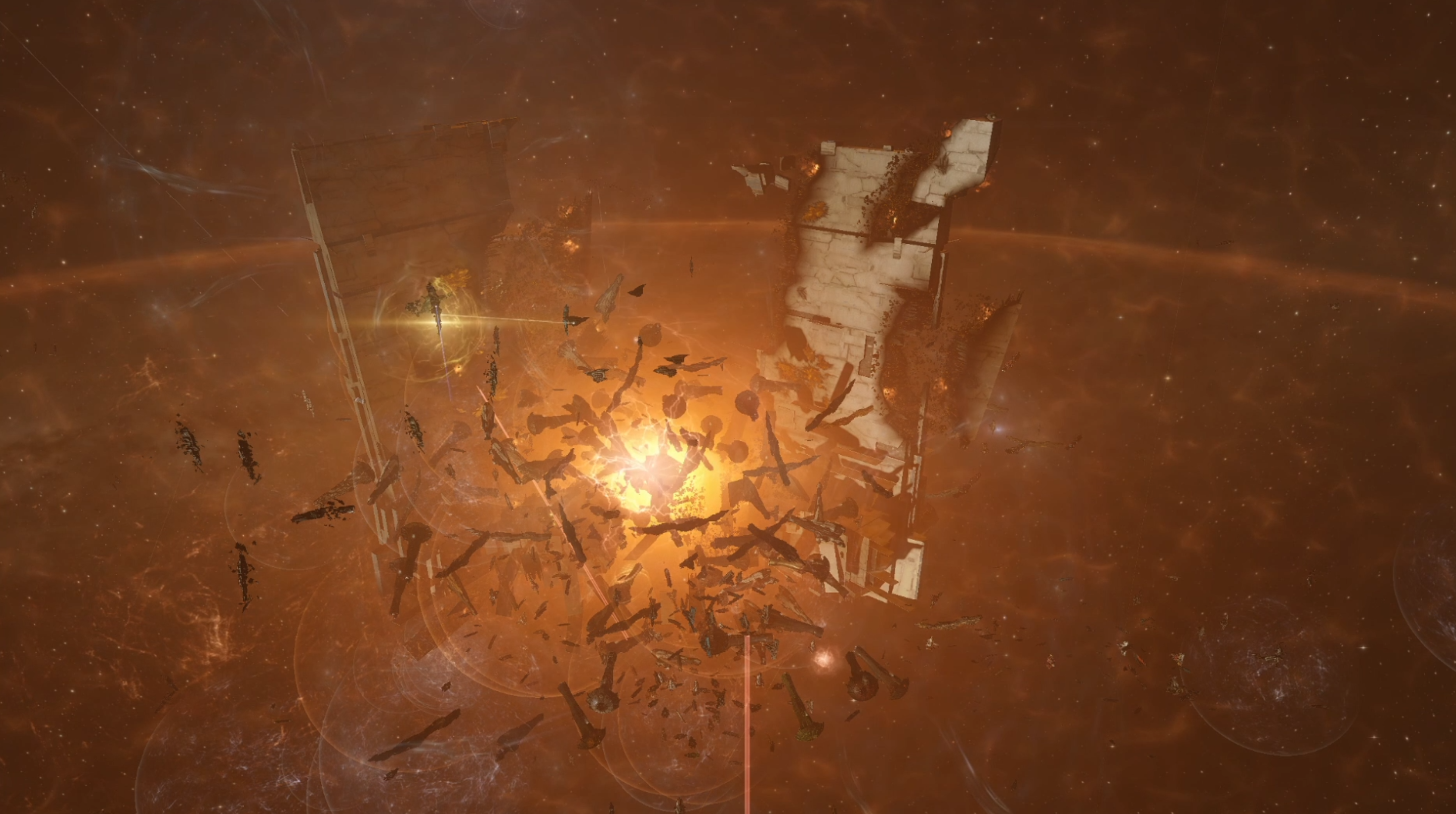 PAPI would eventually get a Keepstar online in Delve, however it would take another 3 tries to do so – the Imperium would go on to destroy a further two Keepstars in the system of 319-3D before finally on the fifth attempt, PAPI would successfully online a Keepstar in the system of YZ9-F6.

The Fury at FWST-8 by the numbers

If you’ve been following the news about the Guinness World Record set during the battle then you’ll probably know that the number of peak concurrent characters in local was 6,557 which was hit at 18:16, however system population was extremely high for the duration of the 12-hour battle: 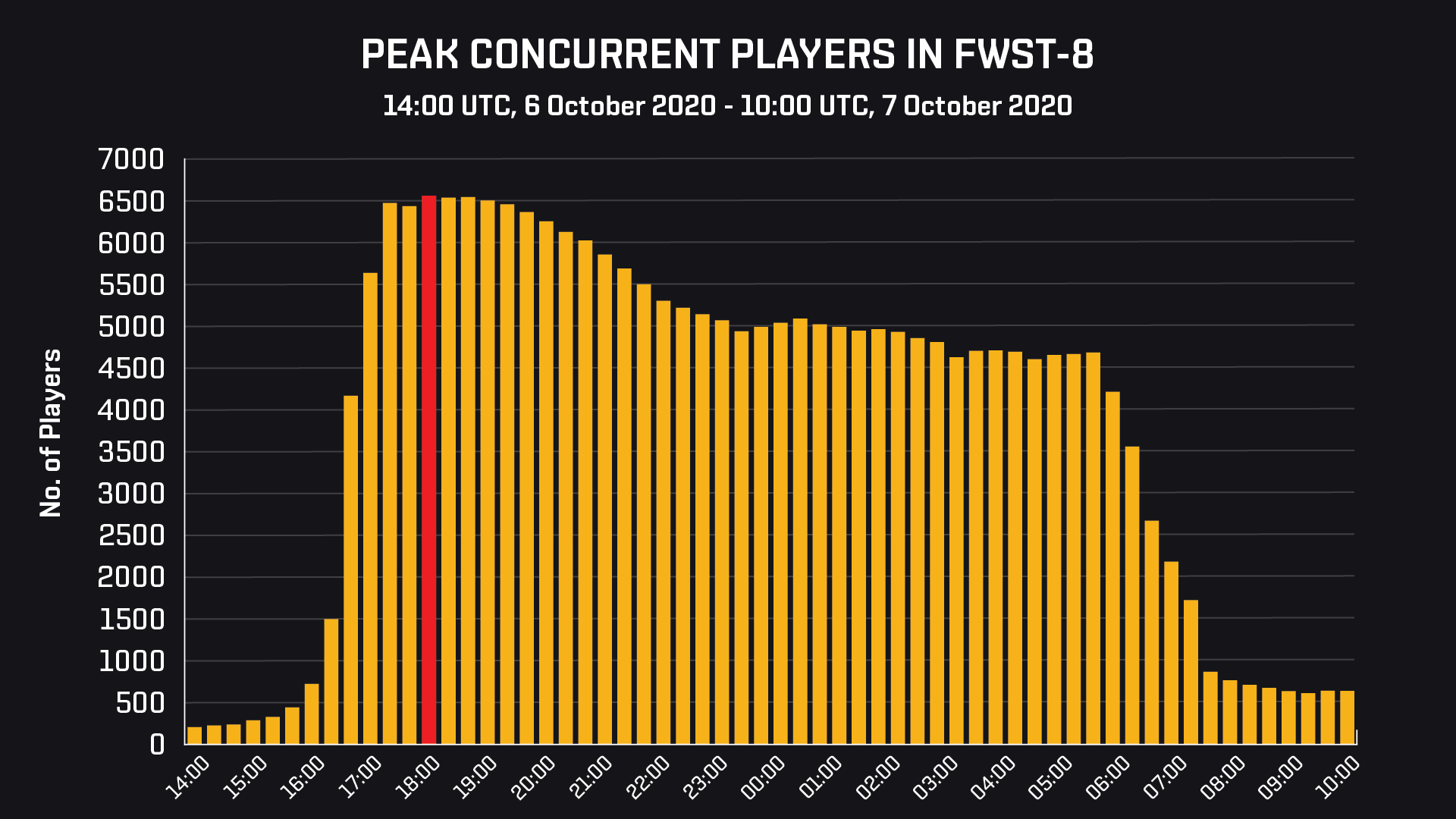 8,825 unique characters in total were in FWST-8 over the duration of the battle representing some 114 alliances and 1,022 corporations: 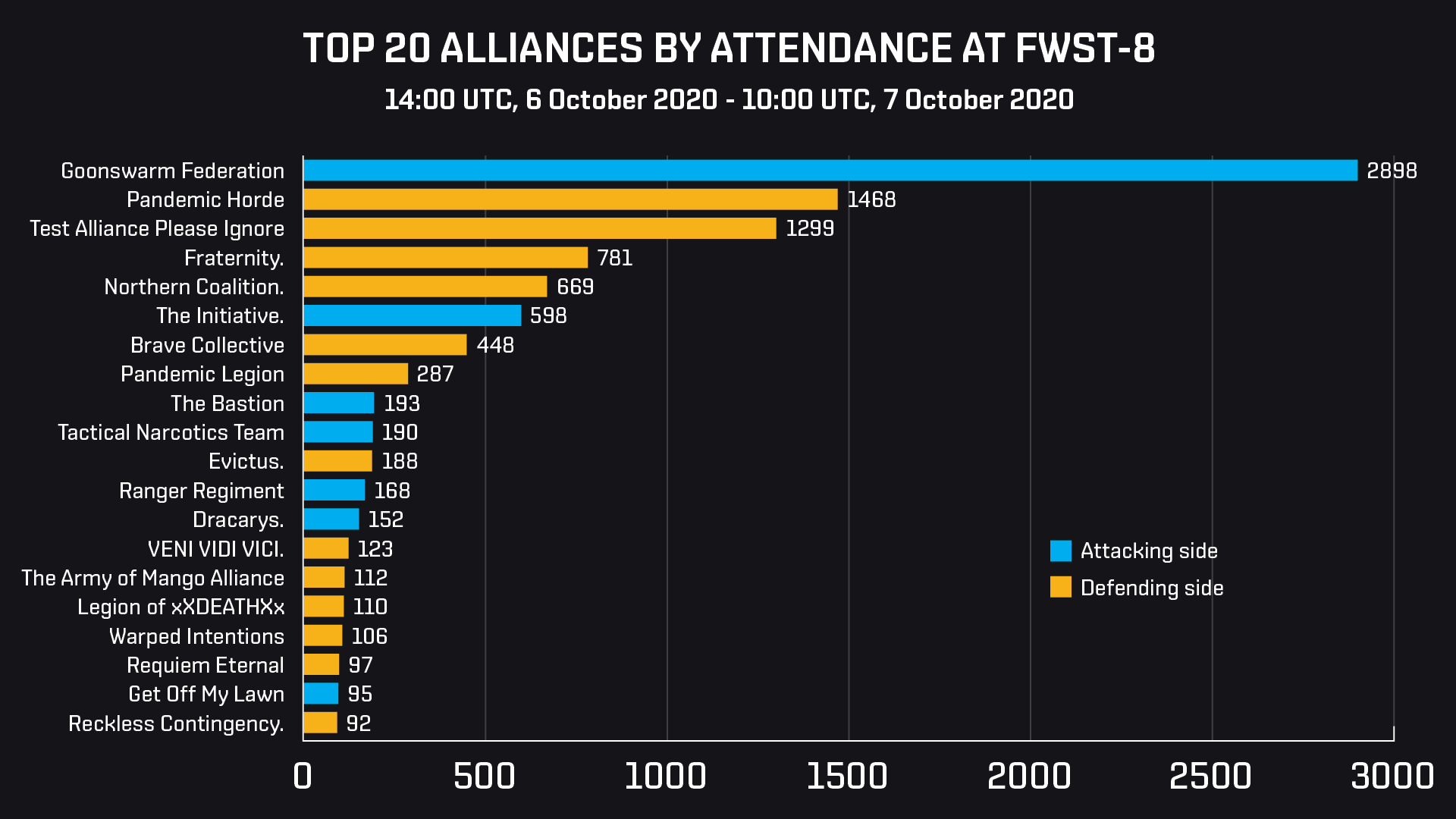 Unsurprisingly there was also an incredible amount of destruction in FWST-8, including the loss of the most battleships ever in a single battle in EVE Online with 1,308 going down, although interestingly only one of which was a Tech 2 battleship! 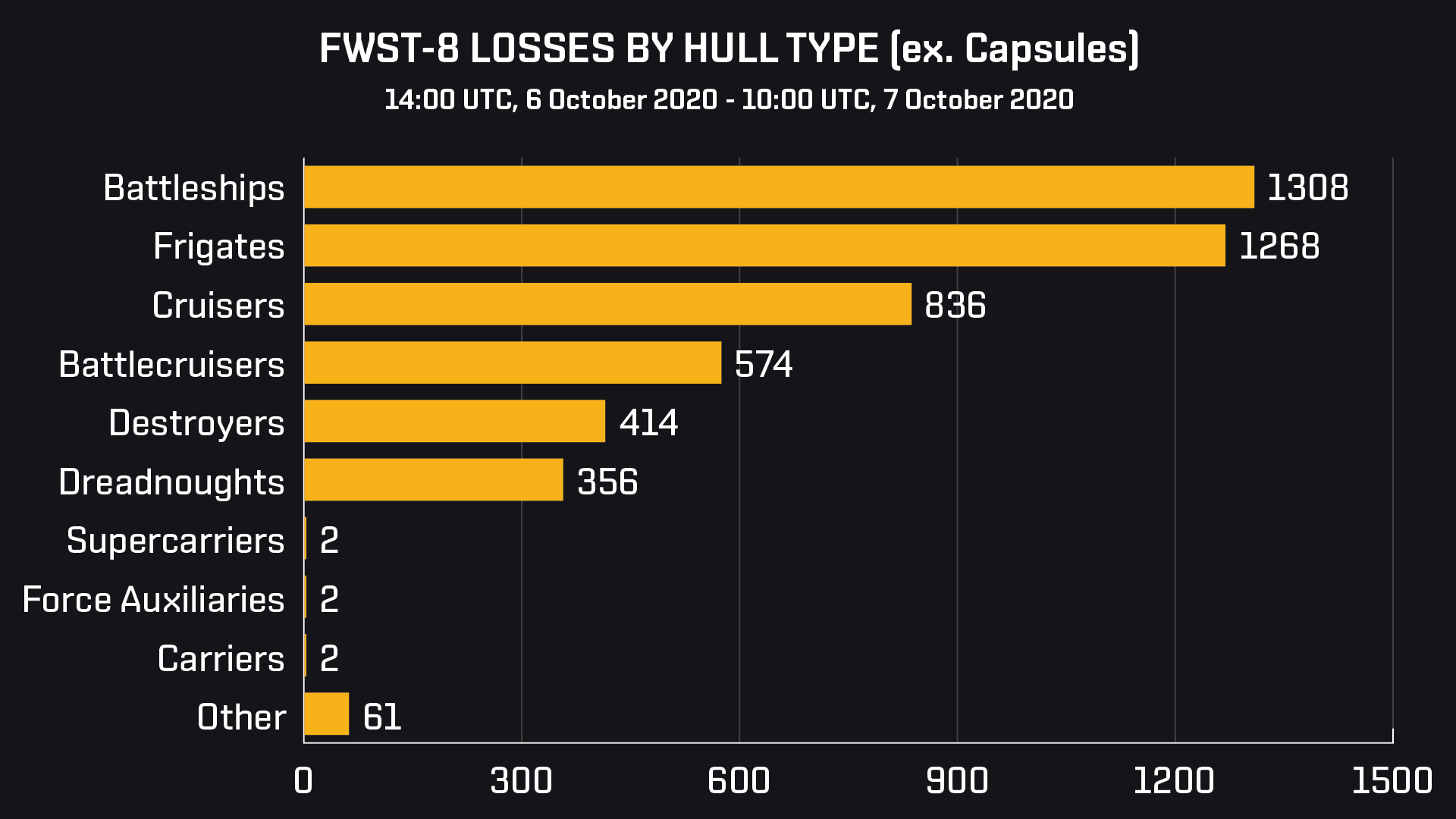 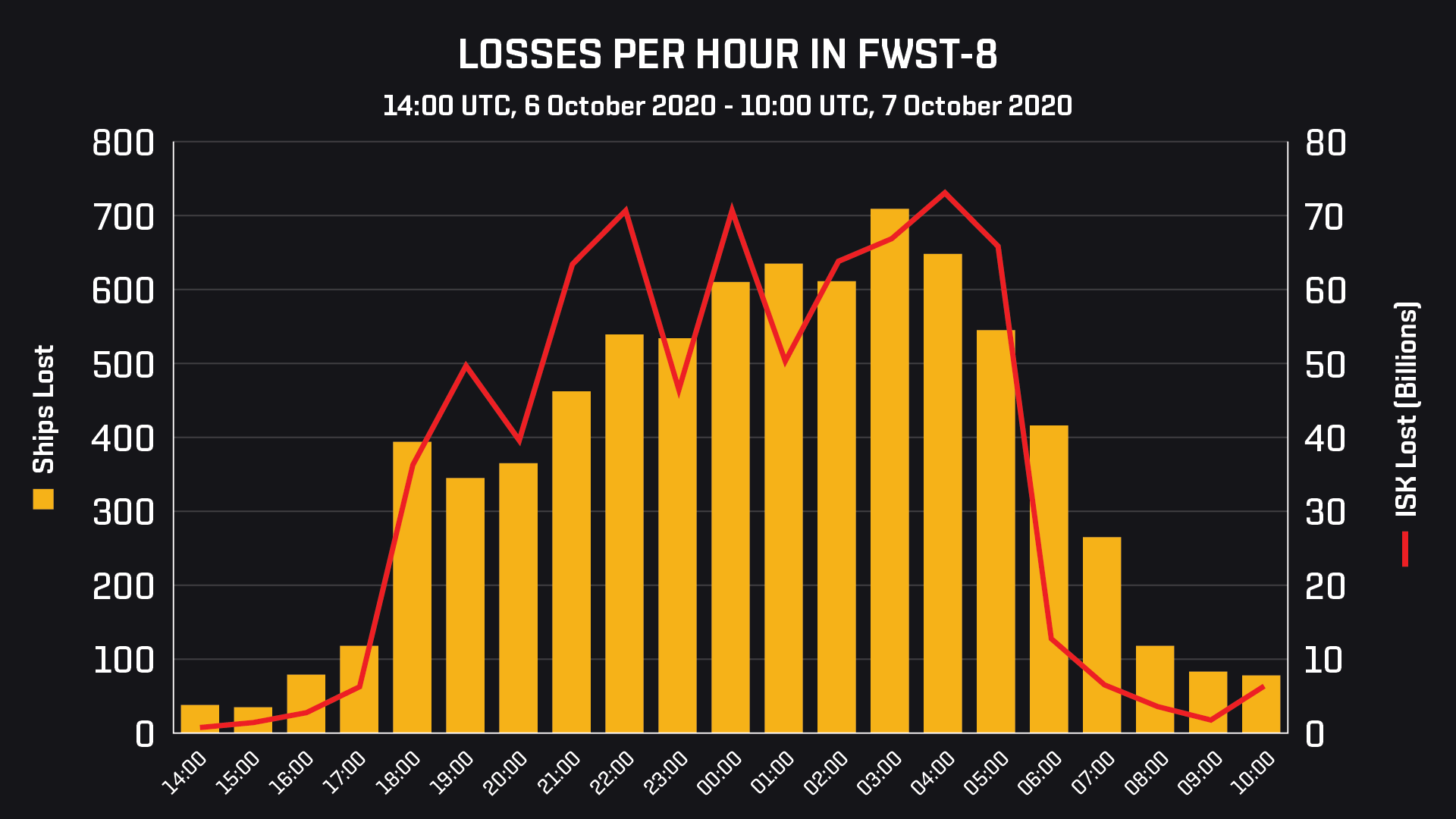 Despite the considerable losses this wasn’t the most expensive battle in EVE, owing mostly to the fact that a committed Supercapital fight never broke out, so for now that title still belongs to the Siege of 9-4RP2 from 2018.

And of course with so many players in the system all at once the server took quite a beating. Despite the system of FWST-8 being reinforced on one of our most powerful nodes, it was quickly overwhelmed and time dilation set in almost immediately as players began piling into the system en masse where it remained maxed out for the entire run of the battle: 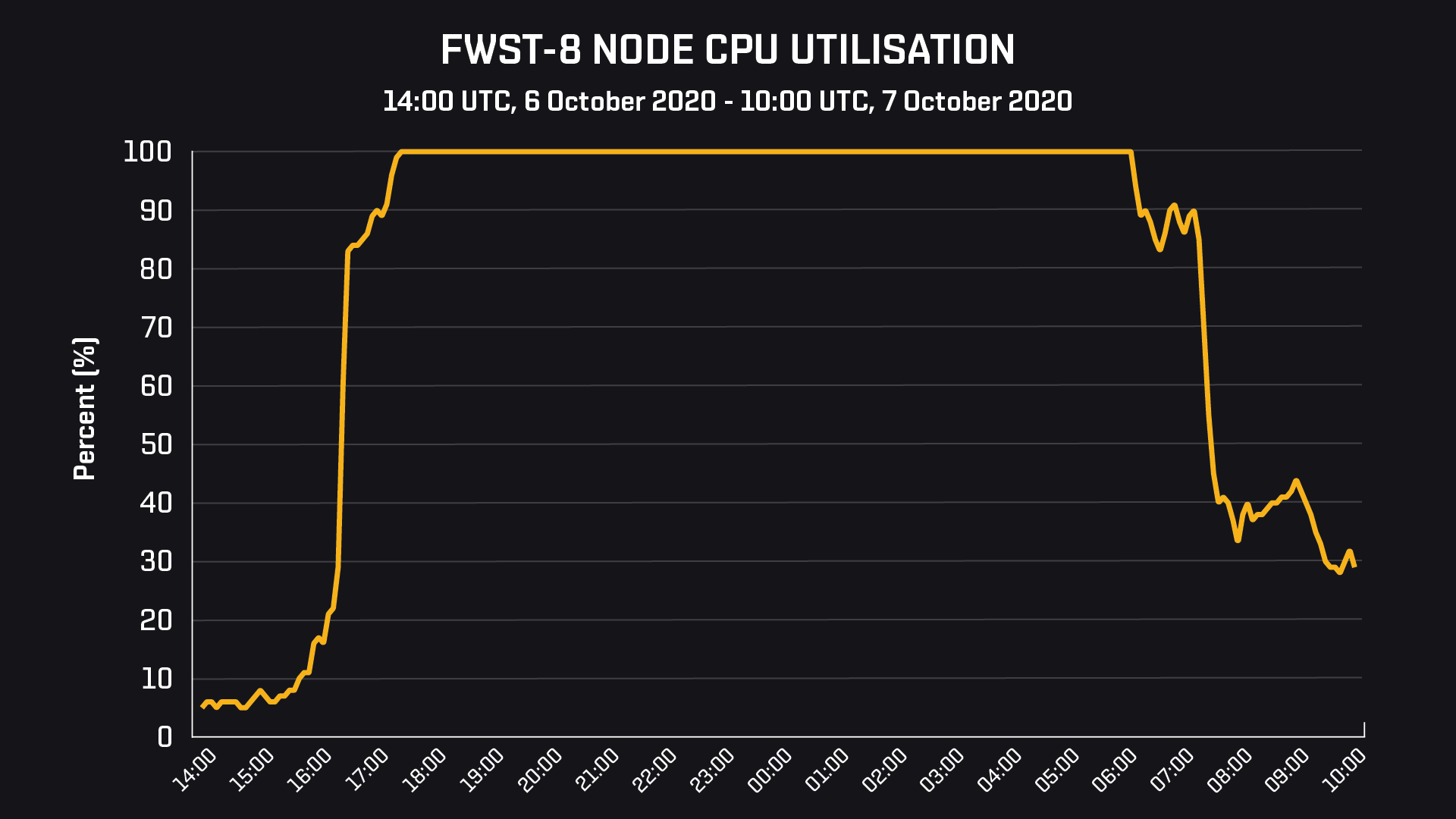 Records will inevitably continue to fall in New Eden. It seems like every other year there’s another war, a bigger battle and more incredible stories that capture the imagination not just of EVE Online players but the gaming world at large. The Fury of FWST-8 was widely reported on not just in the broader gaming media but the mainstream media as well. Millions of people around the globe have read with great interest about your exploits, but only it’s only EVE Online players who can say “I was there”.

Coverage of the Fury at FWST-8 from around the world: